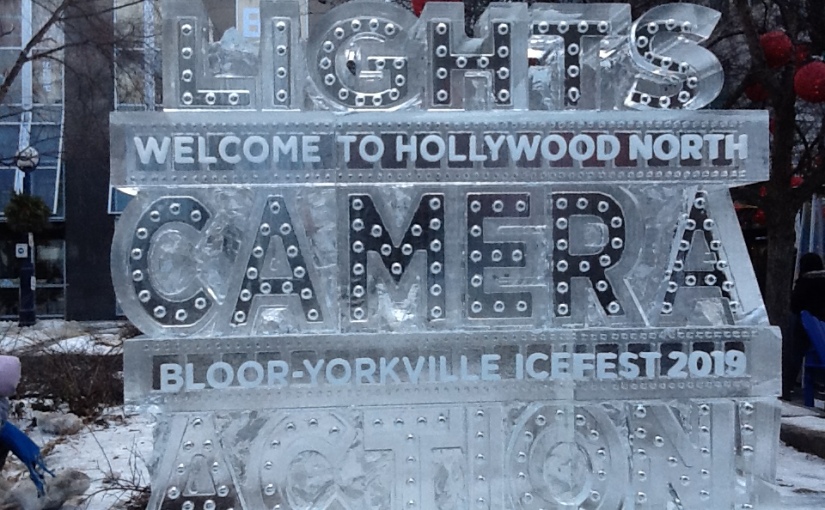 The Ice Fest takes place in Yorkville, an area where a wonderful village used to be located in the old times, that is now the center of Toronto. My late friend, the great architect Boris Zerafa, had the vision to transform the old mews of the village, the old stables where the carriage riders put their horses to sleep, into a very elegant retail and residential area. Yorkville is one of the best parts of Toronto and, for many years, it was the base of the Toronto Film Industry.

I live in Toronto for more than 30 years, few steps from Yorkville, and I have a lot of great memories about the village. I shot some part of my first Canadian film “Maybe” in Yorkville, Yorkville was the old center of the Toronto Film Festival and, for several years, every meeting between filmmakers and/or between filmmakers and film investors was always taking place in Yorkville. Many years ago, we the filmmakers, used to go for a drinks at Hemingway’s, for a bite at Sassafraz and we cut our hair at the Roman Empire, or at Tony&Guy the Yorkville hairdressers.

This year, Elio Dell’Unto went to visit the Ice Fest and sent me the pictures that I post here because the Fest is dedicated to the film industry and the important role the industry had in Toronto, for many years, and still has.

So, Happy Birthday to Elio! I hope that you all enjoy the pictures of the Ice Sculptures, here they are:

An Update About My Eye and My Dog

Many people are still asking what happened with my eye and my dog. My eye is fully recovered after the ‘foreign object’ was removed by the doctor and my sight is back to normal.

I never found my dog, Monica, again. Knowing how wonderful she is, I can only hope that a good family adopted her.

Part of my job as a film-author is to write screenplays. A screenplay is the artistic literary extension of some of my ideas and experiences; after the writing, my job is to transform the screenplay into a film. In directing a film I, again, make use of my most intimate visions and of my personal culture.

For the above reasons, I can say that, in each of my films, there are some autobiographic elements present, some “pieces of my life”. This is the extent of the direct influence that my personal experience has in my artistic work, but I never, until now, wrote autobiographic notes, this is a new thing for me and this is why I probably decided to write a blog entitled THE LAST that will contain a lot of autobiographical elements.

Unfortunately my wife of 50 years, artist Olga Cechova, passed away on August 13 in Toronto (Canada); I got the news via e-mail because I’m in Greece developing the work of my company, Global Film Studio.

I was very hurt by this event; her death was very sudden and unexpected. She was a very healthy and strong woman but a very aggressive form of leukemia, in just a few days, caused her death. When this happened, I was shocked and I could not think properly to anything for a few days. That is when I had the idea to write an autobiographic blog; I don’t know how big of an influence Olga’s death had on my decision, but I was thinking a lot about how fast, sometime, bad things happen and how important it can be to write the relevant parts of our story while we still have time.

I started to write THE LAST around August 25 but I had to give priority to the publishing of DARIA! magazine and to the making of the Global Nonviolent Film Festival because these are two important parts of my company’s yearly activities.

DARIA! is an arts, entertainment and business yearly magazine that we are publishing since 2005.

On September 10, the IX issue of DARIA! was published and the seventh edition of the Festival took place between September 20 and September 30.

To read the complete ninth issue of DARIA! you can visit this link:

Established in 2012, Global Nonviolent Film Festival is the most important and renown nonviolent film festival in the world.

To have a complete vision of the Festival, follow this link and you will be able to see the video presentation of the 2018 Awards:

Now that these two important events have been completed, I’ll go ahead with the writing of THE LAST, the blog with a lot of autobiographic notes, that I started at the end of August. The writing will take time because I want to be as precise as I can in the details. When the blog will be completed I’ll publish it here.

Unfortunately, my wife, Olga Cechova passed away suddenly a few days ago in Toronto (Canada).

Her death was caused by a very aggressive and fast form of leukemia. She was diagnosed on Thursday, she was admitted to the hospital on Friday and she passed away on Monday, August 13.

Olga was my wife of 50 years and she was an artist.

She was born in Zlin (Czechoslovakia) in 1947. She graduated in Industrial Design. We met me in Rijeka (Yugoslavia) and were married in 1969 in Zagreb.

In I971 Olga and I moved to Italy and we resided and worked there until 1983, when we emigrated to Canada.

In Italy, Olga fully developed her career as an artist. She designed some of the posters of my films and she held several exhibitions of her paintings, graphics and sculptures. She held several personal exhibitions in the art gallery I opened and run in Rome for three years.

A few years before we left Italy, her graphic art was exhibited alongside graphic works by Pablo Picasso and Salvador Dali in the art gallery of St. Peter’s Square in Rome.

When in Canada Olga founded her own company: Olga Cechova Fine Arts and, for about thirty years, she continued her career as an artist and specialized in restoration of antique Chinese paintings, sculptures and ceramic vases. She restored hundreds of Chinese art pieces.

I’m sharing here attached the formal announcement of her passing.

I write this to thank and to update all who, in the last three weeks, sent me wishes of good health and who showed interest in the case of my dog Monica, in my search for her and in her actual whereabouts.

My dog Monica disappeared on March 9. Somebody in the village told me that Monica ate something bad (or poisoned) and died. I didn’t believe this story and I opened an investigation because, to the contrary, I believed that Monica was kidnapped.

It took some time but, finally, yesterday I came to know that Monica is alive, that she was taken from the street (I know by whom and why) and that she was brought to another village. I also know the name of that village and now I’m looking for her there.

The pain in my right eye started about 15 days ago. The eye was very small and very red, continuously full of tears and was causing an acute pain that was accentuated if I tried to work on the computer or if it was exposed to the sunlight. The pain was making it very difficult and almost impossible for me to sleep.

For a few days I just waited for the whole thing to pass by itself because I was thinking that it was a simple conjunctivitis.

After that, I got some drops from the pharmacy. Looking carefully in the eye it was possible to see clearly a black spot on the cornea. Then, when I saw that it was going worst and worst, I went to my doctor and she referred me to an oculist in the town nearby, because there is not an eye-doctor in the village. This was happening before last weekend and I could see the oculist only on Tuesday, five days later.

The oculist, a nice and very clever lady, immediately told me that there was a foreign object (that I call UFO) in my eye. This was the spot I saw in the cornea.

She took a pin and she removed the object. Then, she showed me the object and she told me that it was big. She told me that now that she took it out, a little whole was left and that I still have to be on medications (and in pain) for one more week. This is where I’m now.

While all this was happening I could not do my work normally. I had to suspend the Workshops, I didn’t answer timely to my messages and I could not write some important messages. I apologise for this inconvenience but I didn’t have a choice.

For the first time in my five decade-long career, I launched my own site where businessmen, investors, film actors, filmmakers and members of the media can contact me and keep-up with my work.

On this site, I will publish articles written about me, pictures of me or that I take, news and blogs. In particular, this site is the place where:

I like to draw your reading attention to the toolbar on the left hand side. If you click on “Articles” you will find an interview I just did with Olga Matsyna for Daria! magazine 2018; I feel that this actual interview gives an accurate representation of who I am and what drives me.

When you click on “My Films” you will be sent to the Film Production Division page of Global Film Studio’s website. There, you will be able to read about some of my past films (buy them on Amazon, watch trailers, etc.) and the new films that I will direct and produce.

“Film Funding” is the page where I will communicate the actual investment options that may be available in my movies or company. I will be updating this regularly.

If you visit the “Links” page, you will find direct access to the most important websites of my company, some of my professional links, such as the IMDB and Amazon, and my social media addresses.

I wish you an easy navigation and hope that the information contained here will help you get to know me better. Do not hesitate to contact me.

Bruno Pischiutta
Chairman of the Board
Global Film Studio Inc.